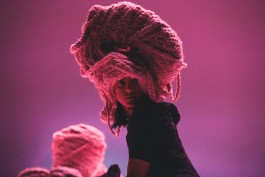 based on Les Noces (The Wedding)
‘Russian Choreographic Scenes in Four Tableaux, with Song and Music’
Composed by Igor Stravinsky (1914-1917)

RITUALIA is a reimagining of Igor Stravinsky’s and Bronislava Nijinska’s 1920s modernist ballet, Les Noces. In the original libretto a Russian peasant girl is sold into marriage; the ballet traces her transitioning from maiden to bride through traditional wedding ceremonies ending in a wedding feast. One of the ballet’s main motifs is hair, symbolizing vitality and fertility. The acts of grooming and braiding hair are elaborately depicted, illustrating a process through which the youthful protagonists are bound to the social body in pre-modern patriarchy. The symbol of the braid was part of the peasant Russian tradition in which a single braid represented maidenhood and the double braid a married state.

Stravinsky’s score is taken as an impetus to create this new work. Colette Sadler´s choreography transforms Les Noces’ narrative into a fictional ritual in which a body assumes iconic power by elevating it to the status of a beautiful objet d’art. Hair retains its currency in RITUALIA, However, unlike in Les Noces, it does not articulate sexuality which should be tamed. Instead, it is taken as a metaphor for the potent power of possessing and of “wearing“ one’s sex appeal. The obligation to submit oneself to the institution of marriage is replaced here with the imperative to attain and maintain erotic desirability.

Taking inspiration from postmodern fashion aesthetics, the piece progresses toward a presentational celebration in its final part, culminating with the appearance of a “bride” encased in a sculptural “dress“ made of hair. The process hair undergoes in the piece, from a natural material of bodily origin to an artifact in form of wearable pieces made of “dead hair“, is interpreted as a cultural shift toward celebrated, enhanced artificiality. Aesthetic objectification is ambivalent; it is potentially as empowering as it is a depersonalizing process.

Abandoning the roles division and pre-assigned gender hierarchies of the original ballet, RITUALIA takes the idea of androgyny as its point of departure. The ritualistic union in this version of a “wedding“ is, therefore, not between two bodies- a bride and a groom- but between a body and a totemic object. This condition of hybridity is explored choreographically. The ritualistic production and reproduction of the iconic through fashion can be understood as the contemporary equivalent of the traditional folklore, conveyed in the original libretto. The dancers of RITUALIA are both the conductors and participants of this strange ritual as well as its objects of worship; Their bodies are the place where the ritual itself happens. 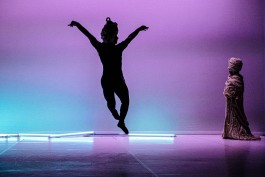