a performance Installation by Samir Kennedy 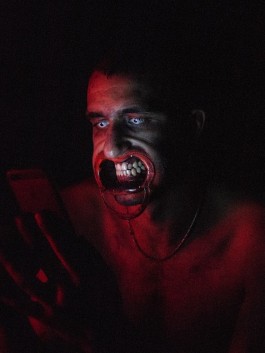 Have you ever wanted to fuck a zombie? Or looked at your colleagues and wanted to eat their faces off? Have you ever fucked someone who might as well have been a zombie?

Have you ever loved somebody so much it made you want to die and come back to life just so you could eat their intestines?

LOOKS LIKE GOD is a new visceral performance installation by artist Samir Kennedy. It appropriates the zombie body in all of its abject and grotesque glory, to seek out where revulsion and attraction coexist in a putrefied wasteland of displaced desire and hypersexual sexiness.

It writhes. It oozes.

It questions our relationship to technology, to labour and to love, to lovemaking and the virtual, the corporeal and the oral. There is no payoff here, no money shot, no chance for redemeption or to feel like we are making a difference, no shot at the system, no sugar, no spice.

The audience enter a dark and ambiguous space. The sound rumbles and cracks and spews all around them

They are voyeur to a mundane ritual

How long have we festered?

They encounter a figure. Is it sick? Is it safe?

The zombie roams, making attempts at connecting, at carrying on, getting on, up and over and through its pathetic excuse of an existence.

A slave to the screen, to its sickness and to its sex, it shuffles and shudders and it sheds itself, over and over and over.

> Tickets: 5 Euro
(for free if you buy a ticket for the show Temporary Store or the lecture performance by Choi Ka Fai)