How does a ghost choreograph 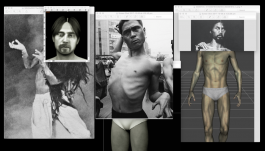 Choy Ka Fai investigates the the heritage of Butoh, inquiring on the relevance and potentiality. Since the spread of Butoh to Europe in the 1978, Butoh has expanded into various forms of cultural assimilations, spiritual cultivation and performative exorcism.

The lecture will trace the research process and the making of Unbearable Darkness - a paranormal dance experience by Choy Ka Fai. The performance speculates on the possible afterlives of its founder — Tatsumi Hijikata, interviewing and inviting his spirit to collaborate for a new dance creation.

Ka Fai proposed the idea of a post-human choreography and questions what is humanly impossible and ghostly possible? How does the digital, the virtual, the immaterial or non-human expressions push us to rethink and expand the notion of choreography? What are what are the technological potentials of dancing with the spirit of the Butoh master?

Choy Ka Fai (b. 1979, Singapore), currently based in Berlin, works freely across the various disciplines of dance, theatre, and visual art. He graduated from the Royal College of Art, London, with an MA in Design Interaction. Ka Fai was the resident artist at kunstlerhaus bethanien, Berlin in 2014 and is currently the factory artist at tanzhaus nrw Dusseldorf. His projects have been presented at major festivals worldwide, including Sadler’s Wells, London, United Kingdom (2016), Tanz im August, Berlin, Germany (2013 & 2015) and ImPulsTanz Festival, Vienna, Austria (2015 & 2018)

The Spirit of Tatsumi Hijikata

Tatsumi Hijikata (9 Mar 1928 – 21 Jan 1986) was a Japanese Choreographer, and a founder of Butoh. Butoh arose in Japan at the end of the 1950s encompassing a diverse range of techniques including dance, performance, theatre, and movement. Hijikata would often refer to his form of physical expression as ankoku butō (“dance of darkness”). Choy Ka Fai invoked Hijikata’s Spirit on his 31st death anniversary in 2017 at his tomb to reignite hope for our choreographic futures. His spirit is now based in Ito city on the eastern shore of Izu Peninsula in Shizuoka Prefecture, Japan.