Body Moving and the Glass Room

Sophie MacPherson and Marek Tuszynski
in conversation with Astrid Kaminski 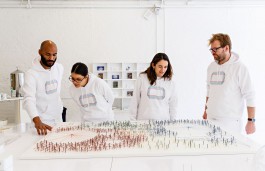 The abundance of personal data has already impacted our social, cultural, economic, and political lives. It’s an issue that's entwined in our private and public concerns – from anxiety about someone taking over our digital identities or lurking in our private activities to wondering about large-scale manipulations of political processes like elections.

But even those of us who have closely observed the increasing digitalization of our information have also observed our changing and ambivalent feelings about its benefits and dangers. We like it or hate it, or both at once ... how frustrating. In our talk we will explore what is our body up to and against in quantified society, one move at a time.

Sophie Macpherson lives and works in Glasgow and Berlin. She received her degree from Glasgow School of Art Environmental Art Department and then became a committee member at Transmission Gallery, Glasgow. In 2009 she received the Scottish Arts Council/Location One New York residency and auditted classes for a semester at California School of Arts. In 2014 she received a Creative Scotland Artists’ Bursary. She is a founding member of the all woman music collective Muscles of Joy.

Marek Tuszynski, Creative Director and co-founder of Tactical Tech, produces creative and social interventions that span various media, from film and radio to television, books, exhibitions and, of course, the web. For the past 25 years, he has been working at the nexus of technology and politics, information and activism and the consequences of living in a quantified society. Marek’s most recent documentary series for Tactical Tech, Exposing the Invisible, explores the digital tools and tactics that now enable evidence based activism to thrive on an unprecedented scale.